Croydon’s only recipient of the Victoria Cross during World War I is to be honoured at a ceremony on Friday (17).

The Mayor of Croydon, Councillor Wayne Trakas-Lawlor, will unveil a specially commissioned paving stone to mark the achievement of Commander Gordon Campbell, VC, DSO, RN, born in Croydon in 1886.

The date is significant as it is the 100th anniversary of the action that earned Commander Gordon this country’s highest award for gallantry in the face of the enemy.

At the time he was commanding HMS Farnborough in the north Atlantic when he spotted an enemy torpedo trail. Altering course, he allowed the torpedo to hit his ship, causing severe damage. When the U-boat that had fired the torpedo surfaced, and with the Farnborough lying very low in the water, Commander Gordon gave the order to fire, resulting in the sinking of the U-boat. The Farnborough was taken in tow and safely beached.

The ceremony, taking place at the cenotaph in Katharine Street from 11am, is part of the Victoria Cross commemorative paving stones programme, a national scheme that will see every VC recipient of the First World War commemorated with a paving stone specially commissioned by the government through the Department for Communities and Local Government. 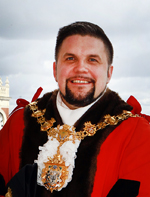 “It’s thanks to the bravery and selflessness of people such as Commander Gordon that we in Britain enjoy the freedoms available to us today – freedoms that we’re sometimes guilty of taking for granted.

“I’m proud to be a part of a ceremony that will mark the part played by Commander Gordon and his crew in a remarkably hostile environment and I hope people will come along to the cenotaph to pay their respects and say a quiet ‘thank-you’ to a brave man.”