The pedestrianisation of North End is set to be extended to include some of High Street, as part of a 12 month pilot to improve movement across the town centre and boost the night time economy.

The project, which aims to boost footfall to and from North End, will see the closure of High Street to all vehicles including buses and taxis between Katharine Street and Park Street, and the creation of a new public space.

As part of the project the following changes will be implemented:

• The existing zebra crossing and motorcycle bays on St George’s Walk will be repositioned to allow room for the new bus stand which will have moved from Park Street. 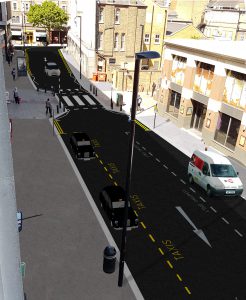 The proposal for Park Street

Works will begin in early September, to enable the new traffic operations and relocation of bus and taxi stands, with the new road layout due to go live in October. The second phase of works will be around how the newly pedestrianised area of High Street is used.

The project is part of Croydon’s Growth Zone, a £500m programme of works being delivered by the council in partnership with Transport for London and the Greater London Authority.

“This is an exciting plan for the town centre, not only will it make it easier to move around, but it allows for al fresco dining creating a new drinking and dining experience in the town centre.

“I hope the new pedestrianised space will attract new visitors from out of town to spend money in the centre, boosting local businesses and Croydon’s economy.”