Croydon is proud to be hosting one of Britain’s most significant sporting events, the Pearl Izumi Tour Series, which returns to the town this year after a successful inaugural visit in 2015.
The Pearl Izumi Tour Series is Britain’s premier professional cycling event which, last year, contributed to the much-improved cultural offer of the town centre and attracted more than 12,000 people as spectators.
Croydon will be the only London 2016 leg in this unique gladiatorial team-based town and city-centre series, and this year’s race, on Tuesday 7 June, will again be enjoying worldwide TV coverage, with millions of viewers seeing the town at its best on ITV and Eurosport.
There will be a series of events in the town centre during the day, including schools’ races, skills and road awareness training, as well as a Mayor’s Charity cycling race, as the buildup to an incredible evening of professional cycle racing gets underway.
It will be a great opportunity to enjoy elite cycling racing and position Croydon as a major sporting and cultural venue although you will need to plan your journeys in advance as a number of roads will be closed for the event. 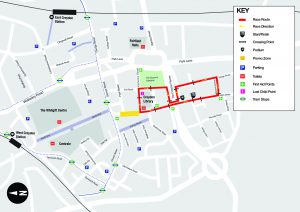 Temporary road changes on the day:
The majority of roads that form the event route will close to traffic from 1pm on Tuesday, 7 June with some roads closing as early as 7am to allow for set-up. Although the race itself will not start until later in the day, the road closures need to come into effect earlier so that barriers and other necessary event infrastructure can be installed. As a result, the event will have an impact on road transport, including bus journeys in the vicinity.
Roads will re-open as soon as possible after the event, with the intention that all roads will be re-opened by midnight, provided it is safe to do so.
Access for emergency vehicles will be maintained at all times and pedestrian access to businesses will not be affected.
Other key points to note are:
Vehicles will not be able to cross the route while the road closures are in place.
Some roads surrounding the road will also be affected and parking restrictions will apply in some areas – check local signs to see where and when suspensions will apply.

The timings for the events during the day are as follows:

For anyone looking to party on after the race finishes the team from www.bikesy.co.uk are hosting a great line-up of DJs at Matthews Yard cafe and bar (just off Surrey Street). Expects sets from Russ Jones aka the Hackney Globetrotter and Croydon’s own DJ X-kutz – an esteemed DJ who was originally discovered DJing in Croydon’s Black Sheep bar.

Please email cycle.race@croydon.gov.uk if you have any further queries about the event.