A Croydon Council-led project that has directly helped almost 3,000 people gain IT skills is marking its first anniversary by donating over 500 recycled council computers to local groups.

In total some 30,000 people in Croydon have developed new online skills since the project started.

In November 2015, Croydon Council and charity Doteveryone (formerly Go On UK) launched Go ON Croydon to help more people, especially the elderly, feel confident about going online to explore hobbies, make social connections and access local services. To do this, Go ON Croydon digital champion volunteers from the council, locally-based private companies and the borough’s charitable sector set up digital zones, where the public can access computers for free and get support with basic IT skills.

The project’s successes include:

Now over 500 recycled Croydon Council laptop and desktop computers will be donated by next summer to local groups across the borough following an IT upgrade. The computers will go to a range of groups by next June, from churches to community centres. 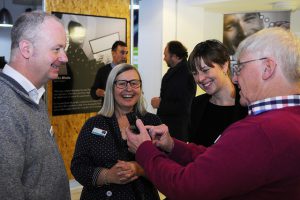 At a special event on Thursday to mark the project’s first birthday, it was also announced that research commissioned by Lloyds Bank showed the percentage of Croydon people with basic digital skills had risen from 70% to 79% in the year since the project began.

The event at the TMRW tech hub in central Croydon welcomed around 40 people, from residents who have benefited from the project to council representatives and their project partners including BT, Lloyds Bank, Crisis, the Metropolitan Police and Age UK.

Councillor Mark Watson, cabinet member for economy and jobs, spoke at the event to praise the involvement of partner organisations. These included Lloyds Bank for its use of two Croydon branches as digital zones, and homelessness charity Crisis, who piloted a scheme where homeless people got a free mobile phone from EE (now BT) to access services online and get help. 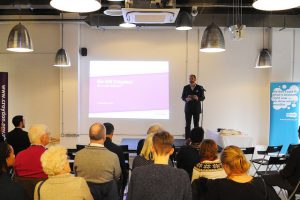 Councillor Watson told the event: “There’s no use saying ‘it’s good to go online’ – you need to find a good reason for people to get online; walking, football, making jam or even studying the behaviour of foxes. There’s a whole generation that never had that knowledge.

“A whole world of possibilities is opening up to people, and that is really transformational with them getting joy from the internet.”

To learn about Go On Croydon, and how to get involved in your neighbourhood, go to www.croydon.gov.uk.gov/go-on-croydon

Jacky Gregory, aged 75 from New Addington, first got involved with Go ON Croydon last year when she subscribed online to the council’s green waste service. She now uses the internet at the council’s Access Croydon digital zone to search for her interests like sewing, and has got onto email. She said: “I came here because I don’t have anybody in my family to ask, so it’s helpful for me and I’ve met people through doing this. I was surprised it is free, as I had thought I would have to pay, which I still would do if I had to. It opens up the world, really.”