Ninety Croydon families will soon move into a new 100% affordable apartment block offering council homes at council rents that was unveiled on Monday.

Next month people on the borough’s housing waiting list will move into the new town centre apartments at Malcolm Wicks House, opposite the council offices. The scheme is part of developer HUB’s 513-home regeneration of the old Taberner House council offices and Queen’s Gardens.

The overall development site adjacent to Queen’s Gardens has four residential blocks ranging from 13-35 storeys, with the three other blocks being built for London and Quadrant and Legal & General. There will also be shops, commercial space, landscaping to the gardens and a café.

Malcolm Wicks House is named after the late MP for Croydon North, and on Monday there was a ribbon-cutting ceremony attended by his widow Margaret, the Mayor of Croydon, the Leader of the Council, some of the new tenants, council members and officers, Deputy Mayor of London for housing Tom Copley, and representatives from HUB, London and Quadrant, and project contractors.

One of the building’s new residents will be Angela Matova, aged 35. She recently heard she will be moving from emergency accommodation into a flat at Malcolm Wicks House with her nine-month-old daughter Chantelle and 15-year-old son Kevin.

She said: “I’m really so happy because I love this property. When Jonas called me from Croydon Council, I was so happy I was jumping that I had a new flat. My son was saying ‘Mum, what’s wrong; why are you jumping?’. I said ‘We’ve got a new flat and we are moving’.”

Legal & General will take ownership of the 35-storey second block that has 251 one, two and three-bedroom apartments for sale. This will have a rooftop garden, communal facilities and a ground-floor commercial unit. London and Quadrant will take the remaining two blocks with 84 and 88 units respectively as a mix of shared ownership and London Living Rent apartments.

Across the whole site, at least 51% of the flats are affordable at council rents, through shared ownership or with rents set at 80% of the market rate under the London Living Rent incentive launched by the Mayor of London. 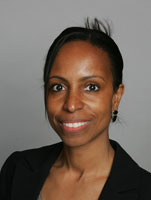 “Malcolm Wicks House will provide 90 great-quality council homes at council rents for people on our housing list. We are committed to doing all we can to tackle the housing crisis, and this new development will help provide much-needed affordable homes thanks to support from the Mayor of London’s Building Council Homes for Londoners scheme.
“This building is a fitting tribute to a dedicated former local MP, a great use of the site of Croydon’s old headquarters, and I hope our new council residents will be very happy in their homes.”
Councillor Patricia Hay-Justice, cabinet member for homes

Damien Sharkey, Managing Director of HUB, said: “We’re proud to deliver 90 affordable homes to Croydon Council. We’re looking forward to completing the rest of the development later this year, including the new Queen’s Gardens which we co-designed with the local community.”

Tom Copley, Deputy Mayor of London for housing, said: “We want there to be many more developments like this across Croydon and across London. I’m proud the mayor has funded these homes as part of a programme to deliver 10,000 new council homes in London by the end of March 2023.”

The site was home to council headquarters Taberner House from 1967 until 2013, when employees moved into Bernard Weatherill House opposite and the site was earmarked for regeneration. Taberner House was demolished in 2015, and the redevelopment began in 2018 after planning consent was granted.