The woman responsible for rescuing and caring for lost dogs across Croydon has received the highest possible recognition from the RSPCA.

Tara Boswell joined the council in 2009 and helps around 275 stray dogs every year. Now her good work has seen Croydon’s service given the stray dog PawPrint gold award after meeting a strenuous set of criteria above and beyond the legal requirements.

The award will be presented at a special ceremony in London in November.

Tara, said: “I’m thrilled the service in Croydon has been recognised for the hard work we do. We’re always looking for new ways to work with residents and our communities to make it easier to reconnect lost pets and find new homes for stray animals.”

“Huge congratulations to Tara for receiving this honour from the RSPCA. Tara works incredibly hard throughout the year to ensure any stray dogs are offered the best possible care.

“We are all proud that the RSPCA has recognised what residents and staff familiar with Tara’s work already know – that she shows unfailing commitment to her work and the animals she cares for and that she consistently goes above and beyond, offering the best care as she tries to reunite animals with their families or find new homes for them.” 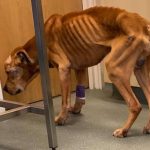 Todd shortly after being found in Thornton Heath 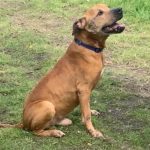 Todd after being rehomed.

In March 2019 an emaciated dog was found tied to a bench in Thornton Heath. He was covered in scars and so weak he couldn’t stand up. The dog, later named Todd by the service, was taken to Croydon PDSA pet hospital by a member of the public.

The hospital phoned Tara who rushed to collect him as his condition was so serious. She phoned rescues and shelters to try and find him a safe space where he could get medical treatment, eventually managing to place him at Last Hope Rescue.

Todd was so ill he could not be fed and Tara had to take him straight to the rescues’ vets in Farnham. Tara carried him into the vets as he was too weak to walk. During the first 48 hours it seemed like he would not make it but thanks to some excellent care Todd was able to pull through and even began to put on some weight over the following weeks.

She used her rescue network to find Todd a loving home that would even cover his expensive vet bills. He has now been successfully rehomed.