Love, Not Hate event to raise money for charity

Love, Not Hate event to raise money for charity

Live music and dance from fifteen arts groups from across Croydon will be helping raise funds for the Mayor’s three chosen charities at an event entitled ‘Love, Not Hate.’

The gala evening takes place on Saturday 12 November from 6pm to 9pm at Stanley Halls in South Norwood.

The Mayor of Croydon, Councillor Wayne Trakas-Lawlor, said: “After the recent increase in hate crimes, the event is an opportunity to celebrate the rich diversity of Croydon. It’s fantastic to see so many performers taking part in a show that not only promises some great entertainment, but that will also raise money for three extremely worthwhile local charities.”

Entrance is £10 per head, either payable in advance or on the door. For booking details e-mail: The.Mayor@croydon.gov.uk or Cllr Manju Shahul-Hameed manju.shahul-hameed@croydon.gov.uk. 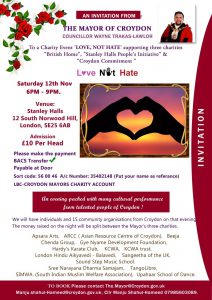 All proceeds will be split equally between British Home, Stanley Halls People’s Initiative, and Croydon Commitment.