Croydon residents will be able to get a year-round green garden waste service and a free doorstep Christmas tree recycling collection under a new deal with the borough’s main contractor.

The measures are part of a new long-term contract with waste company Veolia that starts next year and is due to be discussed at next Monday’s council cabinet meeting.

A free Christmas tree recycling service will also run for two weeks every year from 2018, starting from 8-19 January. Residents can leave their real Christmas trees outside their property for removal, and Veolia will then take the tree for composting. This service had been due to start in January 2019, but Veolia agreed to the council’s request to start a year sooner.

Central to the new contract are tougher performance targets for Veolia, including clearing 100% of fly-tips within 24 hours of being reported. The current rate is 87% within 48 hours. The new contract has a target of no more than 30 missed rubbish collections per 100,000 properties instead of 90 as in the current contract.

• A larger wheelie bin for residents to place their recycled paper and card, replacing the old blue box
• A £9.6m investment in new vehicles, containers and refurbishing the depot
• Veolia cleaning footpaths, pavements and Croydon housing estates
• Agreeing in advance a programme to sweep up all autumn leaf fall from Croydon streets
• Battery and textile recycling

Early in the new contract Veolia will also audit properties with access issues (such as flats above shops) to make sure they have the right number and size of bins and recycling containers. Veolia will also liaise more closely with private landlords to challenge them to take action on waste issues. 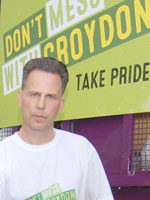 “This new deal will give our residents improved street cleaning and better waste and recycling collections, whether that’s bins, year-round grass cuttings or a used Christmas tree. This contract is important because it sets tougher targets for our contractor to stick to, and I look forward to them delivering a much-improved service across the borough.”

Also covered by Veolia’s new waste contract will be Merton, Sutton and Kingston councils, who with Croydon procured the new deal earlier this year as the South London Waste Partnership.