One of London’s top carnival troupes, Kinetica Bloco, is looking for young people aged 10-18 from Croydon to join them for a series of free half term workshops.

They are looking for budding musicians to gain new performance skills in a fun and friendly environment.

Sessions run from 11am to 4pm on 26 to 29 October 2016 at the Braithwaite Hall in Croydon Clocktower. The closing Saturday session will be a full performance as part of the free youth arts takeover day taking place throughout the Clocktower complex.

For the last three years many young people from Croydon have been part of the project thanks to a partnership with the council’s Croydon Music and Arts service.

Kinetika Bloco is a performance group with an exuberant mix of young brass and woodwind players, drummers, steel pan and dynamic dancers all in costume creating a “unique new British Carnival sound with a decidedly London edge” (BBC Radio2).

Drawing influences from the Caribbean, Brazil, West and Southern Africa, New Orleans jazz, funk and hip hop, the group, led by professional music and dance tutors have performed at many high-profile events.

They represented London in the Beijing Olympic Cultural Festival, as well as performing at the London Jazz Festival, Thames Festival, The South Bank, Notting Hill Carnival, Bestival, and the Royal Festival Hall. They also appeared at the Unveiling of the Nelson Mandela Statue at Parliament Square, and in 2012 they led Team GB through London for their Victory Parade to a live and televised audience of millions.

“Over the last few years young people who have taken part in similar workshops have gone on to perform at some of the most prestigious events in the cultural calendar. It’s a fantastic opportunity, and I’m really looking forward to the show on Saturday when those who have taken part can demonstrate their new-found skills.”

To sign up visit www.kinetikabloco.co.uk/join-us and fill in the Croydon Bloco application form. 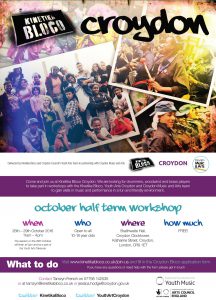