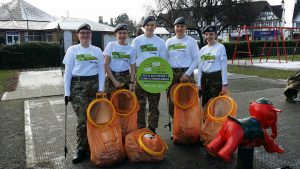 The council’s campaign to make Croydon cleaner and greener got some military muscle on Saturday when air cadets cleared rubbish in Coulsdon.
Five members of Coulsdon and Purley Air Training Corps marked their recruitment among the council’s 184 community champions by clearing litter from Grange Park and nearby roads.
Accompanied by Croydon Council area enforcement officers and the borough’s community champions co-ordinator, the five teenagers aged 15-17 spent an hour picking litter around the park, including the green, Coulsdon Road shops, a public footpath and the children’s playground.
Last summer, the council launched its Don’t Mess With Croydon – Take Pride campaign, which combines local volunteering with council action to encourage recycling and lead enforcement, including a successful council prosecution this month against a man who fly-tipped in Broad Green.
The role of community champions ranges from arranging litter action days and boosting volunteer numbers at neighbouring clear-ups to on-street recruiting and reporting fly-tipping. Events have been held across the borough from Thornton Heath to Coulsdon and from Addiscombe to Waddon.
Tracey Bellamy, Croydon Council’s community champions co-ordinator, said: “It was a freezing cold day but the cadets were keen for the challenge. We were approached by several residents thanking them for improving the area by removing the litter.
“They have also pledged as part of their orienteering to identify and improve other areas covered by their squadron which will include Purley.”

“Our campaign to make Croydon cleaner and greener relies on both council enforcement and superb community champions like these cadets.
“They did a fantastic job on Saturday, and hopefully will have inspired other people across the borough to care more for their local area and how it looks.”
Councillor Tony Newman, leader of the council
[feather_share]
The group will also be helping a community clean-up organised by Friends of Coulsdon Coppice on 21 March.
For more information on how to get involved in the campaign, visit: http://www.croydon.gov.uk/environment/dontmess/dont-mess
You can also report dumped waste via the council’s dedicated fly-tipping hotline on 020 8604 7000, the council’s My Croydon smartphone app or by emailing flytip@croydon.gov.uk