Croydon Council’s network of local street champions who help tackle fly-tips and litter has now run over 100 clear-up events – and is searching for more recruits from the south of the borough.

Over 300 volunteer street champions have cleared alleyways, streets and green spaces in 103 events across the borough since the council’s Don’t Mess With Croydon – Take Pride campaign began in 2014.

Alongside council staff and Veolia waste contractors, street champions lead by example on keeping their neighbourhood tidy, as well as reporting flytips and other environmental issues to the council.

The most recent community clear-ups include: 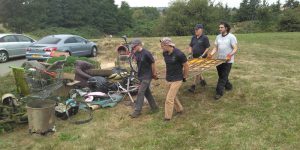 2) A vanload of rubbish and fly-tipped bikes and mopeds cleared by conservation volunteers in Brickfield Meadow in Woodside.

3) Residents clearing a vanload of waste from an access alleyway off Cromwell Road in Selhurst.

Now the council’s champion co-ordinator is calling for more people in the south of the borough to get involved. Tracey Bellamy said: “From Coulsdon air cadets to Thornton Heath community groups, we have a really dedicated network of street champions across the borough, but we’re not stopping there.

“We particularly want to recruit people in areas like Kenley or New Addington that often attract fly-tippers who come in from elsewhere, dump waste at the roadside and then drive off.

“Being a street champion can fill as little or as much of your time as you want – some carry out litter picks and others run special events, but everyone that takes part will be making a real difference to their community and the borough as a whole.”

“Tracey’s street champions are a fantastic example of people taking pride in their local environment, but we want to keep going so even more of our areas benefit from this initiative.”

To find out more about becoming a street champion, email tracey.bellamy@croydon.gov.uk

To report waste dumped in Croydon, email flytip@croydon.gov.uk. Alternatively use the free My Croydon app available for smartphones. You can also phone any issues through on 0208 604 7000.