Council leaders have set out plans to deliver for Croydon in 2019/20 – continuing to invest in the services that matter most to residents and in the borough’s future.

Amid a challenging climate of ongoing government cuts to local funding, and economic uncertainty due to Brexit, the council’s cabinet is pledging to protect frontline services and to support society’s most vulnerable.

Caring for the elderly; supporting children and families; delivering affordable homes and investing in young people top the list of priorities in the budget proposals.

This is alongside continued investment in Croydon’s future and its growth, delivering new homes, jobs and opportunities through the borough’s ongoing regeneration.

Published here, the budget report sets out the cabinet’s plans to prioritise spending in the next financial year, for approval at next week’s full council meeting. 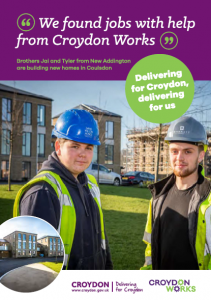 “At this time of Brexit uncertainty, and continuing Government cuts, we want to provide our residents with as much clarity as possible about how we are prioritising spending.

“The days of politicians promising ever-improving services but not offering any explanation about how they would pay for them are – thankfully – coming to an end.

“The vast majority of this year’s increase will be directed to supporting our elderly and vulnerable residents, putting more police officers on the beat, improving our services for children and building new affordable homes for local people.

“We are now seeing many of our previous investments in Croydon’s future come to fruition this year, with to the opening of the new Fairfield Halls, the £6.5m Legacy Youth Zone, and the first affordable homes from Brick by Brick, the development company set up by the council.”