Council leader sets out a vision for Croydon’s cultural future

Council leader sets out a vision for Croydon’s cultural future

Guests at a packed Royal Society of the Arts (RSA) fellowship meeting in Croydon heard the borough’s plans for delivering a cultural renaissance.

Amongst many ideas discussed on the night, including ambitious plans by the local RISE Gallery, was the council’s determination to bring more well-known performers into the borough’s venues.

To enable this, the authority is this summer starting work on the £30m refurbishment of the Fairfield Halls to create an arts complex on a par with the South Bank Centre. The Boxpark project is also due to open next to East Croydon station at around the same time, which will create a new performance space with a capacity of around 2,000. 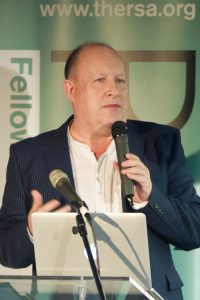 Councillor Tony Newman, leader of the council said at the event:

“We have a once-in-a-generation opportunity to change Croydon for the better. It’s certainly interesting looking back at the big names that have performed here in the past, but I’m far more interested in who will be pulling in big audiences for the next thirty years. The scale of investment coming to the borough right now is what can make that a reality. So whenever the council talks to big developers we ask two questions – how will you deliver affordable homes and what will you invest in culture and the arts?

“One of my top ambitions for Croydon is that we can provide first class venues to both attract top level performers from all disciplines and provide high quality spaces for our own communities, particularly local young people to get their first taste of playing to large audiences. We also aim to encourage more galleries and public art elements across our regeneration schemes that everyone can have access to.”

An unprecedented 400 people registered for the borough’s first RSA Fellowship meeting, meaning the event, hosted by RISE Gallery, The RSA, and Croydon Council, had to be moved to a larger venue.

RSA London regional manager, Mark Hall, said: “One of the ways we support citizen-led change at the RSA is developing networks, led by our Fellows (members), to tackle issues that are important to them. This was the purpose of this event and we were expecting maybe thirty people for a reception at RISE gallery – the response has been phenomenal. There is obviously a great deal of energy and enthusiasm around the role of culture and arts in the regeneration of Croydon.” 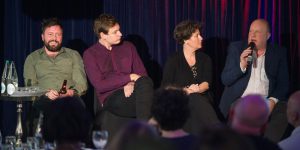 Also speaking at the event was keynote speaker, Kevin Zuchowski-Morrison of Croydon’s RISE Gallery, who has been one of the leading figures in Croydon town centre’s recent explosion of colour. Having negotiated with the council and property owners to allow hoardings, flank walls, and shop shutters to become canvases for street artists to express themselves, he is now looking to encourage others to build on this success. He used his keynote speech to highlight some of the new ways his gallery is approaching the world of art to make it ‘inclusive for all and exclusive for none.’

He said: “When I decided to set up in Croydon it was because I could see the town’s potential. I knew it was an amazing place and I just needed to find ways of translating that to other people. We haven’t spent money on marketing, but we’ve done things differently and that has brought international attention to the town. The way we’ve negotiated a self-policing truce between the many different street artists and graffiti writers is, I think, a unique solution to the problem of artists having their work painted over. Equally, when we sell secondary market artworks for collectors we make sure that a percentage of the profit goes back to the original artist, something I believe is a world first.”

RISE is also now well underway with plans to open 22 new studio spaces for emerging and established artists, and a proposal is well advanced to create an iconic piece of public art which is being commissioned from a well-known street artist and that will be one of the largest such murals in the world.

Commenting after the event, Councillor Timothy Godfrey, cabinet member for culture, leisure, and sport, said: “Croydon’s cultural aspirations are rooted in our ambition to make the borough the heart of South London. Events like this one show just how much passion there is out there from people and organisations who want to be part of that journey.” 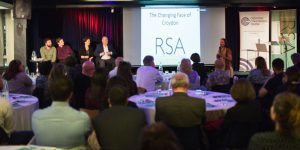