An estimated 3,000 people turned out for Croydon’s first Pridefest on Sunday (28 August), with approximately 500 taking part in the parade from North End.

The event was a celebration of south London’s LGBT+ community, and was the second-largest ‘pride’ event inside the M25 this year.

Crowds were kept entertained by a full day’s programme of musicians, cabaret performers and DJs, and Surrey Street was alive with food stalls and outside bars to complement the street’s regular cafes and pubs.

Dozens of local community organisations took part in the parade, which was also headed by singers Rainbows Across Borders, a voluntary group for LGBT asylum seekers who are fleeing persecution of oppressive homophobic and transphobic regimes. They were joined by hundreds of individuals on the day, who turned North End into a sea of rainbow flags in the procession to Surrey Street.

Host Christopher Haul guiding everyone through the day and Topping and Butch had the crowd in stitches with their satirical cabaret act.

Local band Bugeye, who have recently been featured on BBC Radio 6 Music, had Surrey Street rocking with their disco punk, and many other singers, drag acts and cabaret performers kept the audience well-entertained all afternoon. The evening finished with afterparties at the nearby Project B and Luna bars.

Mayor of Croydon, Councillor Wayne Trakas-Lawlor, said: “Leading hundreds of people along North End for the first council-supported Pride festival in my home town, and opening the festival on stage in front of such a huge crowd in Surrey Street was an unforgettable experience. I didn’t expect such this amazing turnout, but the thousands of people who came on Sunday have shown that Croydon is a diverse, open and welcoming place to live and work. It was a brilliant celebration of everything we have to offer, a big boost for local businesses, and I’m looking forward to making next year’s event bigger and better still!”

Croydon Pridefest was supported by the council, and the chair of the event was Councillor Mark Watson. 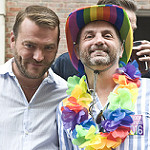 “I’d like to thank everyone who worked on organising Pridefest – it was a real team effort. From Ray Harvey-Amer, who put so much time into making the parade a success, and Chris Hall who organised the entertainment, to the team at Nudge Factory who got the word out on the street in advance – and of course the traders who ensured we had great food and drink available throughout the day. I could name dozens of others, but you all know who you are and you have my real gratitude for a job well done.”