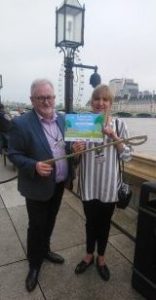 Croydon Council staff were presented with a golden litter picker at the ceremony in Westminster.

Croydon was recognised for being extremely proactive in helping organise events across the borough, and for standing out on social media and helping promote the campaign to residents.

The council was presented with a golden litter picker to mark its success at the Keep Britain Tidy Volunteer Celebration at Westminster on Tuesday 18 June.

“Warm congratulations to the hundreds of volunteers who gave up their time throughout the campaign to spread the message of Don’t Mess With Croydon – Take Pride.

“Throughout the entire year our Street Champions organise hundreds of litter picks clearing tonnes or rubbish from community spaces across the borough.

“I’m immensely proud of all the work our Street Champions and officers have put in throughout the Great British Spring Clean and the rest of the year.”

Allison Ogden-Newton, CEO of Keep Britain Tidy said: “This year, more than half a million Litter Heroes took to the streets during the Great British Spring Clean and removed nearly a million tonnes of litter from our streets, parks and beaches.

“Local authorities are vital partners in this mission to help empower people to take care of their own community – providing equipment, advice and support on a local level, and picking up the bagged litter.

“We wanted to recognise Croydon for the sheer amount of noise and excitement they drummed up with local residents by using social media and outreach to engage more people.”

To find out more about becoming a Street Champion email champions@croydon.org.uk