Crisis, the national charity for homeless people, has been welcomed to Croydon by the council at the formal opening of a modern new centre in the heart of town.

Crisis Skylight Croydon, the eleventh of its kind in Great Britain, has been established to provide vital services to help people find permanent homes.

Its staff will help people through every stage of their journey out of homelessness, from early engagement on the street, to progression into education, employment and independent living.

The council has been working with Crisis for the last three years to find a suitable location for the centre and ensure the charity has solid links in place with other homelessness support agencies in the area.

The charity began working in Croydon in the autumn of 2015, delivering classes and advice sessions in drop-in centres for people living on the streets, as well as in hostels and supported housing projects. The move to a permanent home makes it easier for homeless people to get the help they need from Crisis.

The centre is equipped with facilities ranging from an IT suite, training kitchen and art room, to showers and a laundry.

A former client of the centre, Debbie Medhurst, also spoke about her experiences and how she has grown in confidence since being helped by the team from Crisis.

Crisis Chief Executive Jon Sparkes said: “We’d like to thank Croydon Council for its help and support throughout the project to create such fantastic facilities here in the borough. They’ve shared our vision for support for homeless people at a time when homelessness was, and continues to be, a growing issue in Croydon, and have encouraged us to become a key player in tackling homelessness in the area alongside other agencies working in the borough.”

Last year over 1,000 households were formally accepted by Croydon Council as homeless, and rough sleeping levels have become an increasing concern.  This has been one of the main reasons the authority has been so keen to get Crisis into the borough. 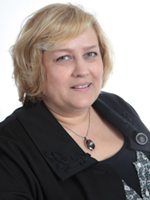 “We’re delighted that with some persuasion from the council Crisis have come to Croydon to set up a base. It’s fantastic to see the quality of the centre they’ve created, and it’s also been brilliant to see how they’ve worked with the council and other providers to complement existing support in the borough.  Too many of our people do not have a place they can call home and the work of the Skylight centre will go a long way to help tackle this.”