The arrival in Croydon of a Hollywood film crew, complete with A-list movie stars, was the trigger for what one student hopes will be a career in film production.

When the team behind the new blockbuster, Criminal – starring Kevin Costner, Gary Oldman (pictured above, right) and Tommy Lee Jones – decided that the town centre offered some great locations, Croydon Film Office encouraged the production team to offer work experience to local young people, including Amy Jones who was 17 while the production was shooting, in autumn 2014.

Amy (below), at the time a student at Croydon High School, Selsdon, has since started a film studies degree course at Reading University. She said: “I was put in touch with Croydon Film Office when I said I was interested in seeing what happens on a film set. I’m hoping to go in to the film industry when I finish studying.

“Criminal was filming around Fairfield at the time, and the film of 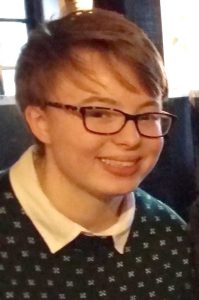 ficers arranged for me to go along and shadow the runners.

“Kevin Costner and Gary Oldman were in the scenes. For me it was very exciting, of course. You don’t think of them as real people – it’s almost a surprise to find they are man-sized.

“But they were busy getting on with acting. If I’d just walked in I wouldn’t have recognised them necessarily, their acting looks so natural.”

Amy also enjoyed seeing “somewhere so familiar, converted into something so different”. The filmmakers had used foam to make the walls look as though they were pocked with bullet holes.

“It’s exciting for Croydon to have this creative stuff going on,” said Amy. “We love filming here; attracting all these A-listers is good for our self-perception.”

Despite the repetition, Amy was fascinated by the minutiae of the changes in take after take, as lighting and sound specialists explained their work to her: “I’m hoping to do something practical in the film industry and this was a great introduction.

“I’m a hands-on person; I like to get stuck in, so spending time shadowing runners like this was a brilliant experience for me.”

The scenes filmed in Croydon included one in which Costner’s character escapes from a gunfight in an ambulance that he drives along College Road, across George Street and into Dingwall Road.

Andrew Pavord, of Croydon Film Office, said: “We’re so pleased that Croydon plays such a significant role in this big-budget movie.

“There can be a perception that filming in London is only about the landmarks in the centre – but to really hold a story together, everyday London spaces and streetscapes are essential.”

The film is released on 15 April, and the trailer can be seen at www.youtube.com/watch?v=3bvnoqsvY-M

To keep up to date with all Croydon filming, visit www.croydonfilmoffice.co.uk