Last minute touches to costumes and final rehearsals are under way for a host of Croydon performers as they prepare to take part in London’s New Year’s Day Parade (LNYDP).

The parade, which is one of the biggest events in the capital’s calendar, will see Croydon’s entry titled ‘In Croydon our heart beats’ celebrate the borough’s diversity, love of music and showcase local talent with a range of performances.

The ‘In Croydon our heart beats’ title, is the borough’s take on this year’s competition theme ‘London loves life!’ Every year since 1997, all of London’s 31 boroughs, along with the City of Westminster, have been invited to enter the parade with some form of entertainment based on the annual theme and to demonstrate London’s diversity.

All entries are automatically entered into the Boroughs’ Competition, vying for a share of the big charity cash prize. However this year – for the first time ever – the public will be able to vote online for the best London borough entry, meaning residents can get behind Croydon and show their support by voting.

Votes can be cast on the LNYDP website from midday on 1 January and will end as the last act passes through the performance area. 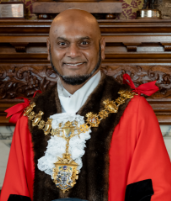 “I am really looking forward to attending London’s New Year’s Day Parade and supporting Croydon’s wonderful entry. It is a real celebration of the diverse mix of people, cultures and talent in our fantastic borough.

“I hope residents get behind our entry, show their support and vote for us to win when the competition opens on New Year’s Day.”

To vote for Croydon to win the boroughs’ competition click here from midday on Wednesday (1 January 2020).