The remembrance event will be held in the council chamber, Croydon Town Hall, Katharine Street, on Friday 27 January at 12 pm, with an introduction by the Civic Mayor, Councillor Alisa Flemming.

Marilyn Arbisman of Croydon Synagogue will deliver a speech before a keynote address from Anita Peleg from Generation 2 Generation, an organisation that enlists third-and second-generation descendants of Holocaust survivors to tell their family stories, keeping those legacies alive. Councillor Flemming and Croydon’s Executive Mayor, Jason Perry, will sign a Book of Remembrance and invite the public to do the same.

The event will also feature the announcement of the winners of the annual school competition, which is open to Croydon pupils. This year, there were over 70 individual entries received. The competition, run by the Standing Advisory Council on Religious Education (SACRE), asked students to create artwork, a short story, poem, essay, or short film on the theme of Ordinary People. This theme highlights the ordinary people who let genocide happen, the ordinary people who actively perpetrated genocide, and the ordinary people who were persecuted. Funding for the prizes this year were donated by Yad Vashem UK, an organisation dedicated to promoting Holocaust education and awareness.

The event is open to the public with spaces allocated on a first come, first served basis. Those who are unable to attend in person will be able to view the event as a webcast on Microsoft Teams. To attend or view the webcast, please contact Yvonne.Gaye@croydon.gov.uk .

Civic Mayor of Croydon, Councillor Alisa Flemming, said “Holocaust Memorial Day gives us the chance to reflect on the devastating impact of the Holocaust and other genocides, to hear the voices of survivors and to remember the millions of victims. 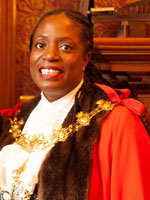 “This year’s theme is a powerful reminder of the role that ordinary people play in these horrific events, as victims, by-standers and perpetrators. Also, to remember that ordinary people can choose to be extraordinary in their actions – by challenging prejudice and speak out against hatred in their societies.

“It gives us the opportunity to think about the responsibility that each and every one of us has to stand up to antisemitism, racism, homophobia and all forms of hate, and to reflect on the kind of world that we want to create for future generations.”