Members of Croydon’s Windrush community joined the Mayor of Croydon and council leaders for a special ceremony outside Croydon Town Hall today, celebrating their rich contribution to the borough past and present.

Windrush Day (22 June) is the day when, in 1948, a group of passengers from the Caribbean arrived on the MV Empire Windrush from the Caribbean to help rebuild Great Britain following the Second World War. It is the day when the Windrush generation’s contribution to British life is celebrated nationally – and locally in Croydon, where one ward, Thornton Heath, is home to more Windrush residents than any other in London.

At today’s event, Croydon celebrated this rich history as Addiscombe resident, Lynette Richards-Murray, 82, shared her experience of working as nurse in England in the 1950s after arriving from the Caribbean.

Ms Richards-Murray, co-founder of the Association of Guyanese Nurses and Allied Professionals (AGNAP), said: “I came to England from Guyana in the 1950s to practise nursing, to ‘do my best’ as my father would ask of me. I started out in Taunton, Somerset, where I was stereotyped and kept on sluice and bedpan duties to start. It was only after complaining that I was able to make progress. By 1968 I had moved to Croydon and became an NHS manager. Now at the age of 82 I am still contributing to the success of British nursing through the work of my charity AGNAP.”

Local resident Anika Wilson brought the ceremony to life with her re-enactment of a Windrusher ‘Saleah Alvira Henry’ arriving in England, before members of Croydon’s Windrush community joined the Mayor in raising the Windrush Flag with its ‘We are standing on their shoulders’ motto. 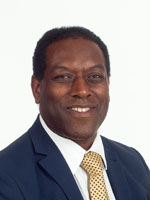 Councillor Young also shone a light on the Windrush legacy in Croydon’s charitable sector. Croydon Caribbean Credit Union is the oldest credit union in England, borne of the challenges faced by Windrush pioneers who struggled to gain bank loans upon arrival from the Caribbean. The Barbados Overseas Nurses Association, the Association of Guyanese Nurses and Allied Professionals and the Nurses Association of Jamaica were set up to help Caribbean recruits to the NHS trying to settle here under challenging circumstances. Others, such as the Association of Jamaicans UK Trust, Friends of the Heart Foundation of Jamaica, Croydon Sickle Cell and Thalassemia Support Group and Croydon Supplementary Education Project, all play vitally important roles.

As current Chair of Croydon African Caribbean Family Organisation UK, a Thornton Heath-based charity founded by the late Hon. Alderwoman Gee Bernard, Councillor Young has spearheaded local efforts to give greater recognition to the Windrush legacy and has created a Windrush Garden themed ‘Our pioneers, our heroes , our contribution’. The garden was opened on Windrush Day 2019 by Thornton Heath-born Olympian and Freewoman of the Borough, Donna Fraser OBE.

Croydon’s Mayor, Councillor Sherwan Chowdhury, said it was a privilege to raise the Windrush Flag with Windrusher Hazel Davis and ‘Saleah Alvira Henry’ and encouraged everyone across the borough to celebrate this important day in the national calendar.