A council drive to keep Croydon shopfronts clear of private business rubbish is to be expanded after a trial period led to more recycling and less fly-tipping.

In March, Croydon Council officers imposed a daytime ban on private waste contractors collecting rubbish from outside Thornton Heath high street businesses. The move came in response to reports that business waste left on the pavement encouraged fly-tippers and made the shops less attractive to customers.

Businesses at these 100 addresses now keep their commercial rubbish on their premises until it is collected after 6pm, all dispose of it legally and as a result the council has collected an extra 1.5 tonnes of recycled waste and saved £6,000 in fly-tip disposal costs.

Now the council plans to expand the 9am-6pm waste restriction, trialled as part of the council’s ‘Don’t Mess With Croydon –Take Pride’ campaign, to London Road in West Croydon this summer. More trials are being considered for other parts of the borough later in the year.

As with Thornton Heath, council officers will begin sending leaflets and doing door-to-door visits in advance of the West Croydon trial to both inform businesses and encourage them to get involved.

Enforcement is led by council neighbourhood safety officers, who have only needed to hand out two fixed penalty notices for non-compliance since the Thornton Heath trial began. They have regularly visited shopkeepers, who have reported a tidier high street.

Mohammed Kafeel, manager of Islamabad Halal Butchers in Thornton Heath high street, said: “Most of the shops never cared before; now because of the council putting on pressure they do care. It feels nice and clean. A lot of people visit this shop and it’s much better for us.”

Councillor Stuart Collins, deputy leader – Clean Green Croydon, said: “Although it’s up to private businesses to dispose of their own shops’ waste, in practice this often meant discarded delivery rubbish that did Thornton Heath high street no favours.

“That’s why council officers stepped in to tighten the collection times and encourage shopkeepers to take more pride in their surroundings, and I’m really pleased at the difference this trial has made.

“Now we’re looking at doing something similar in West Croydon, and I look forward to seeing even more of our shopkeepers getting involved in making their local parades tidier and more attractive to customers.”

The Don’t Mess With Croydon – Take Pride campaign combines getting local people to become community champions with enforcement against the worst offences.

As well as prosecuting people in court and handing out over 800 fixed penalty fines since launching the initiative in summer 2014, the council has also signed up over 280 community champions who lead litter picks, carried out more than 1,320 business licence inspections and encouraged over 240 businesses to sign a pledge to keep their street tidier. 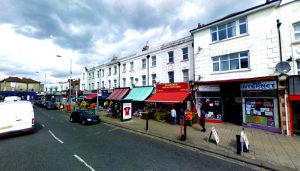