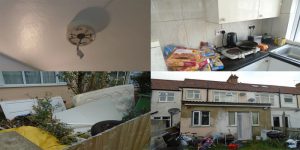 A Croydon landlord who let a property become a neglected fire hazard has been fined £6,665 by magistrates.

Croydon Council successfully prosecuted Allison Aris last week after an inspection found she was letting out a shared house in Thornton Heath with inadequate fire safety measures, a filthy kitchen and gardens dumped with rubbish.

Other health and safety breaches discovered during the October 2016 inspection included a kitchen with mouse droppings on the floor and a broken cooker, as well as front and back gardens dumped with furniture, car parts and other bulky rubbish.

At Croydon Magistrates’ Court on Tuesday 11 April, Ms Aris, aged 50, of Melfort Road in Thornton Heath, pleaded guilty to four offences under the 2006 regulations attached to the 2004 Housing Act. These require landlords to keep their properties safe and clean for tenants to live in, to prevent them from falling into disrepair and neglect, and to provide adequate rubbish disposal. Ms Aris also admitted one further offence of failing to respond to a council request for information. She was fined £6,665 and ordered to pay the council’s full costs of £1,694 with a victim surcharge of £170, totalling £8,529.

Ms Aris has now carried out works to improve the standard of the accommodation and is seeking an agency to manage the house on her behalf. Two of the men have left the property since the inspection.

“Most landlords in Croydon make sure the homes they let out are safe, legal and in good condition, but this property was a potentially lethal fire hazard.

“This case underlines why we introduced our landlord licensing scheme in the first place, and we will continue to proactively inspect rented properties in Croydon and our priority remains to make sure private tenants live in good-quality housing.”