Helping to lead the borough to a brighter, safer future following the pandemic and supporting those suffering loss from Covid-19 are the priorities of the borough’s new mayor.

Councillor Chowdhury has lived in the borough for more than 40 years and first became a councillor in Beulah ward in 1994. He was treasurer and vice-chair of the Croydon Race Equality Council and helped the council promote race relations during the late 1980s. He was also one of the founding directors of the Race Equality Partnership Croydon.

Councillor Chowdhury came to England in 1976 and when he first moved to Croydon opened a restaurant in Thornton Heath. Realising his passion for helping people he later changed career to work within the social housing sector which he has now done for 26 years.

He helped establish the Bangladesh Welfare Association, serving as its General Secretary and President, and founded an education trust to help underprivileged young people from the UK to rural villages in Bangladesh. He also served as school governor for Winterbourne Boys for 14 years.

The father of three will be supported by his wife, Rohema, who has worked locally as a teaching assistant for nearly 30 years.

During his year in office he will champion three good causes, raising funds and awareness for: 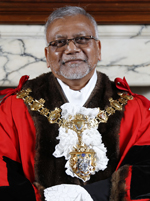 “It is a great honour for me to become the first citizen and the Mayor of Croydon. Growing up, I was inspired by my father’s passion for community work. He was a community pharmacist, helping the poorest and most vulnerable access medical care. This inspired me to live a life which helped others.

“In my personal life I have always tried to support those who need that little extra help, so that they can reach their full potential. I am a first-generation immigrant who this country has given an opportunity, and I want to ensure that every person has the same or better. That they do not face discrimination in any form, and they get that chance to explore and secure their aspirations and dreams.”

Assisting Councillor Chowdhury as this year’s Deputy Mayor is Councillor Felicity Flynn who represents New Addington North. Born in Southport, Merseyside she moved to Croydon just under ten years ago and became a councillor in 2018. Recently she has been busy helping The Family Centre Fieldway and Good Food Matters tackle food poverty during the pandemic through ward budget funding.

Living with elderly parents has made Councillor Flynn aware of the issues faced by people in their demographic. Alongside tackling food poverty she would like to do more work addressing social isolation among the elderly and promoting good mental health for all residents.