A great evening of professional cycling in Croydon

A great evening of professional cycling in Croydon

Thunder and lightning added to the excitement of the school-cycling races as thousands of people prepared to line the streets of Croydon for a night of professional road-racing on Tuesday (7 June).

The penultimate round of the Pearl Izumi Tour Series was on a new course for this year’s event as some of Britain’s leading cyclists hurtled around some of the town’s best known landmarks.

After a thrilling men’s race in which the lead changed several times, Jon Mould claimed a sixth race victory of the Pearl Izumi Tour Series and Croydon Council leader Tony Newman presented him with a limited edition print from local artist Gavin Kinch, to remember Croydon. 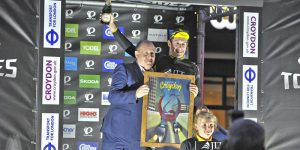 Jon said: “I just got stuck into the bike race and you take your opportunities when they come along. With five laps to go you forget about your legs and you just want to get home first.

“It was a tough circuit but coming under the flyover right near the finish I think it was good to watch. You could see us coming through that bottom corner and through the finish so it was a good circuit.

“I like the new course. I think I can adapt to it quicker than a few others. You would have thought this was going to be flat but it was draggy everywhere.”

Madison Genesis took the team honours to close the gap on JLT Condor going into the final round in Portsmouth. 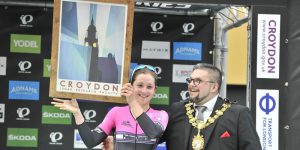 Luckily for the professionals and the crowds, the weather improved during the day after a deluge which caused severe flooding in various parts of the borough and brought a premature halt to a series of Croydon’s schoolchildren races, although all of the youngsters from the eight participating schools got to take to the track. They were followed by Wheels for Wellbeing who defied the wet conditions to provide an opportunity for disabled cyclists to ride and race on the course’s start/finish straight.

The rain also didn’t prevent a host of local riders from raising funds for Croydon Commitment with a special relay race which was won by Metropolitan Police ahead of the London Underground Cycling Club and Old Portlians Cycling Club. A special mention should go to the two-man Develop Croydon team who put up a great fight despite each having to ride three times further than their rivals. 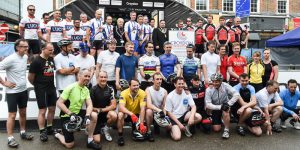 Meanwhile, there was a serious message on the day with a Transport for London stand aiming to encourage more people to cycle and Keltbray offering cyclists a view of what truck drivers can see from their cabs.

“The Croydon leg of the Pearl Izumi Tour Series gets better every year. The crowd was great and numbers were easily twice that of last year. A great success”
Councillor Timothy Godfrey, cabinet member for culture, leisure and sport